- July 09, 2020
As the electronic technology witnessed significant development in the last few years, the demand and need for PCBs with high Tg (Transition Glass Temperature) has increased. Tg is considered as the most important feature of any epoxy product. Tg is the temperature where any solid or rigid product is changed into a rubbery state that greatly alters its physical and chemical properties. In case of a PCB, a high Tg PCB offers greater resistance to temperature, pressure, moisture, or any harmful chemical. Also, they provide enhanced electrical and mechanical support to the electronic devices. In other words, it can easily stand harsh industrial conditions. That is why its usage has increased significantly in electronic applications where high energy is released like antennas, AC power supplies, Embedded computer systems, and many more applications where high levels heat is generated.
After reading this article you will understand everything about a high Tg PCB from its properties, and advantages to its applications in the field of electronics.
What is high Tg PCB? 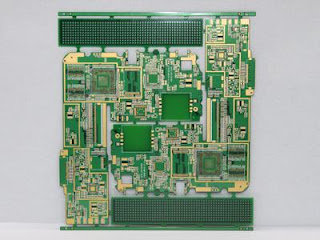 Transition glass temperature is the highest temperature at which a substance remains in a solid state. Further heating transforms it into liquid from. In case of PCBs, Tg is the temperature in which the substrate, polymer or glass, is at the transition temperature between solid and rubbery state. So, a high Tg PCB is designed to withstand extreme temperatures so that it should not melt, soften or burn during excessive heat generation. Every PCB has distinct Tg which is dependent on its base material.
If, anyhow, operating temperature of a PCB exceeds Tg, it will adversely affect the working properties of that PCB. That is why PCBs having low soften, melt, and show deformation, and their electrical, and mechanical properties are also adversely affected. The modern sophisticated electronic devices
In the field of electronics, the grade of an epoxy glass material is represented by FR4. Normally, FR4 of simple PCBs is around 130 degree centigrade, of moderate is around 150 degree centigrade, while FR4 of a high PCB is more than 170 degree centigrade that can effectively withstand high heat generated during complex operations. So, if your device is operating over 130 degree centigrade, you will need a high Tg PCB to remain in safe limit.
Properties of a High Tg PCB
Since the foremost requirement of a PCB is that it should be resistant to high temperature generated during its operation, a high Tg PCB successfully fulfills this need. Some basic properties of a high Tg PCB are:
1. High resistance to Temperature
2. High resistance to pressure
3. Improved mechanical and electrical properties
4. Low coefficient of thermal expansion
5. Higher value of thermal stress resistance, and many more
So, a high Tg PCB is definitely more efficacious than an ordinary PCB but it is also comparatively costly. However, considering its increased durability and diversified functions, it proves to be a cost-effective solution for resisting heat in high-energy electronic applications.
Advantages of high Tg PCB
Some of the advantages of a high Tg PCB over a normal PCB are explained below:
1. Increased stability
A high Tg PCB offers high stability and durability as it is designed to resist high temperature, moisture, harmful chemicals, and moisture. So, the life of electronic device also increases by using high Tg PCBs.
2. Withstands High Power Density Designs
A high Tg PCB is an ideal choice for high-power design electronic devices as it can easily withstand extremely high temperatures. That is why its demand in heavy industries is increasing rapidly since the last few years.
3. Perfect Choice for multilayer PCBs
Since multilayer PCBs are generally used for complex and sophisticated electronic appliances that are operated under stressful pressure and temperature conditions, a high Tg PCB is a perfect for such applications. It increased reliability, durability, and functional workability of boards.
Applications of High Tg PCB
High Tg PCBs have captivated the attention of users since they are a perfect solution to high power density designs. Whenever you have to deal with electronic applications where excessive heat generation might hinder the working of circuits, a high Tg PCB is the only effective and reliable option you have. In other words, it costs far more to decrease the heat generation of any electronic device or PCB as it directly affects the size, cost, and working of that device, so we use a high Tg PCB to overcome this problem at comparatively low price. Hence, it is not only an effective solution to deal with high temperature and high-density electronic applications but is also more reliable and cost-effective. So, it fulfills the needs and requirements of the domestic, and industrial customers in dealing with high energy applications.
As mentioned earlier, the major advantage of a high Tg PCB is that it is not affected by the heat generated by the electronic device. Because of these properties, it is extensively used in many applications, some of which are:
1. Industrial Applications
Majority of industrial applications require high-temperature, harsh chemical and electrical conditions. That is why these PCBs are widely used in industrial applications like drilling machines, high power pressers, power inverters, solar power equipment, and other such devices.
2. Automobile Industry
Majority of automobile appliances employ high Tg PCBs. The production of automatic and self-driving cars has stimulated the need for these PCBs. In automobile industry, high Tg PCBs are used in radar technology, control systems, navigation devices, and
Similarly, these PCBs are also used in computer technology, telecommunication appliances, security systems like fire alarms, Wi-Fi boosters, high-processing antennas, gateways, embedded computer systems, and other medical, and aeronautical appliances where high heat and energy is released.
In short, instead of minimizing the heat generation that can severely affect the working of PCBs, the developers have focused on resisting the high heat generation by producing high Tg PCBs.
Concluding Remarks
To sum it all, high Tg PCBs have become inherent part of many high-density electronic appliances that have to resist high temperatures and excessive heat generation during their operations. The need for boards that can resist extremely high temperatures was always a challenge for the manufacturers. However, the introduction of high Tg PCBs has solved this issue. These PCBs can withstand temperature greater than 170 degree centigrade that makes them an ideal choice for many commercial, and industrial applications and more and more industries are transforming towards using high Tg PCBs.
This simple guideline has elaborated everything about high Tg PCBs from their distinct properties, applications, and advantages over normal PCBs. So, whenever you have any difficulty understanding high Tg PCBs, simply read out this piece of writing.
high Tg PCB

- September 26, 2020
IT-88GMW-3.0 IT-88GMW-3.0 is an advanced ultra-low loss & high Tg (185° C by TMA) material for demanding Radio frequency applications. The material is designed for long range, short range and medium range Radars used for Autonomous driving or Advanced driver assist systems operating in the 76-81 GHz. frequency range. The product offers better dissipation factor and insertion loss than fiber reinforced PTFE products. Its higher elastic modulus helps reduce mismatch in hybrid applications. The thermal conductivity is higher than PTFE based systems and therefore the product is also suitable for demanding 5G Base stations, power amplifiers and antenna applications which are expected to operate in the mm wave range of frequencies and also require high power handling capability. The product can be paired with a full prepreg offering to build high reliability multilayer boards. The dielectric properties are very stable with temperature and therefore very suitable for thermal cycling requi
Read more

- July 07, 2021
In this article, you'll get to know the fundamentals of PCB manufacturers and how our company "PCBSKY" is unique from other manufacturers in China. What are the three main aspects of the PCB industry?   According to our experience of more than 10 years as the leading PCB Company in the industry, we can easily write that three main aspects in the PCB industry for which most clients look for are: PCB Design PCB Manufacturing  PCB Assembly Design, Manufacturing, and assembling of PCB is a systematic method for examining the parts and components which is needed to execute. It included obtaining costs of a commodity and seeks to cut costs before actual development begins. There are specific manufacturing, design, and assembling principles required to be following during the PCB process execution of any electrical or electronics part. Eventually, a final design concludes the series with a review among the most common issues related to the PC Board or Printed Circuit Board.
Read more